This month's YA writer is JR Creaden! Let's jump right in.

JR - Perhaps it was those summers spent in Maine reading Stephen King, but I imagined writing as a more solitary experience than it’s been for me. Instead, I’m involved with more writers than I ever dreamed possible—exchanging stories and tips, brainstorming, commiserating, researching. I talk to more writers everyday than I knew existed before.

Kristen - I was much the same way. I assumed writers holed up in caves and never spoke to anyone, but for me it has been a lot of interaction with other writers and discussing the craft and brainstorming.

What do you do when Real Life intrudes on your writing?

JR - As in when the characters are too much like their real life counterparts? That’s happened a few times, but then I call up the facts and reorganize my thoughts. The characters are unrelated and from alien worlds that didn’t even coexist in the same time periods prior to coming aboard the ship (where the story begins in Re: Morse). Also, none of them had parents, so their core problems—personality or otherwise—have to be addressed by themselves. I am their author, not their parent.


Kristen - Do you have a favorite scene or line you’ve written?

JR - I do! The scene when Relativity’s crew performs a Vincil play, Renderings, for the cadets. I’ve been pressured quite a bit to drop the scene, but I’ve stuck to my guns. The play, which is not exactly “children-oriented” any more than Romeo and Juliet, and the character reactions to the play, are essential to the plot of the whole series.

As an educator and a parent, I believe it’s important for our literature to expand our familiarity with different media. Students of all ages are expected to read, perform, and engage with theater, and using theatrical performance within literature is a fantastic method to model a universal experience.


Kristen - Tell us about your main character’s weaknesses. How do these affect the first book of your series?

JR - In Re: Morse, the main character, human Hugo Morse is plagued by self-doubt. While we don’t go into major detail about Hugo’s background, certain elements haunt him. Despite the utopian version of Earth he remembers, Hugo’s experiences were not so pleasant. His upbringing within the Syndicate, raised on space ships before being deposited at the Rodanbary Academy, was rather lonely. His fear of failure holds him back and puts everyone in danger.


Kristen - What do you want your tombstone to say?

JR - “Free Fertilizer ↓” I wrote a poem ages ago about my wishes for after death called “Bury Me Standing” all about how I’d like to be buried Bene Gesserit style—upright, wrapped in linens, with a fruit tree planted over me. It might sound morbid, but I have no qualms about death, about the function of my physical body after death. I can’t stand the idea of being put into a sealed box, where my matter is isolated from the Earth that sustained me. I want to give back.

Kristen - Thank you so much for stopping by and sharing! If you'd like to find out more about JR, follow any of the links below!

JR began her writing career as a child disgruntled with song lyrics. After some early success with poetry and essays, she spent decades distracted by songwriting and academia until her story dreams became too interesting to keep to herself. Re: Morse, the first book in JR’s YA scifi series Contact Files, will soon be ready for public consumption or vivisection. Her goal is to share stories that inspire readers to embrace cultural diversity, the promise of science, and the value of humor and imagination to build a future that’s more Star Trek and less 1984. When she’s not writing, JR enjoys exchanging “your mama” jokes with her children, floating in lakes, and slaying virtual dragons.
Posted by Kristen Kooistra at 12:00 AM 1 comment:

And we're back with another book tree! Last month was slower than January, but still a good month in material. Out of 12 books, 9 of them made the tree list! 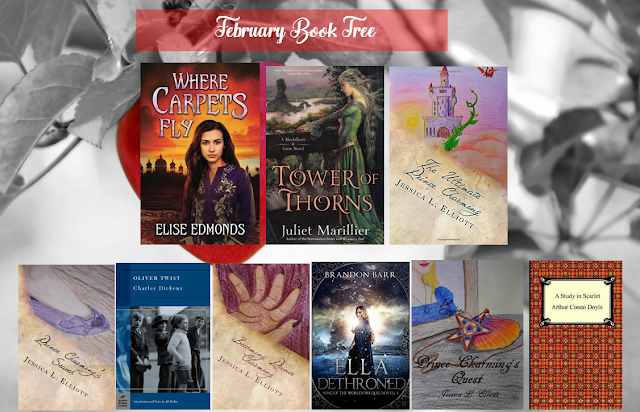 The month started off fast enough as I plowed through a series I started in January. I also devoured my first classic challenge book. After that, I hit a slow patch that had everything to do with attention span, other things calling my name, a crazy shift in weather(I am not kidding, mid-February we were getting 50-60 degrees in MICHIGAN), and a general restlessness.

It's not about the quantity though, it's about enjoying what you read, so a slow month by no mean equals a bad one! I'm sure as summer creeps closer it'll get even slower. 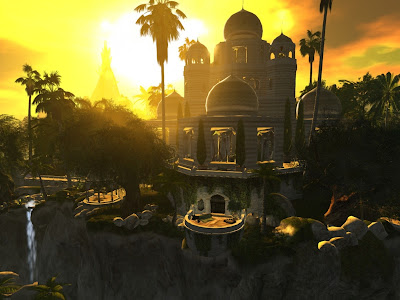 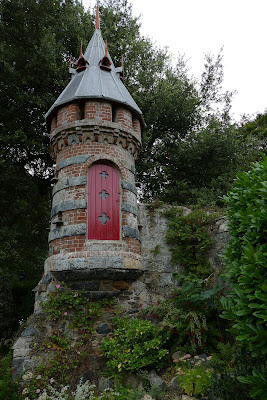 The lady believes that certain conditions are needed to enter the tower and eliminate the problem, and she needs Blackthorn to meet them. Meanwhile, Grim is fighting his own struggles as something comes a little close to home in bringing back horrible memories from his past. Add in an old friend of Blackthorn's who says the time is right to take down her old enemy, and you've got the recipe for a perfect novel! 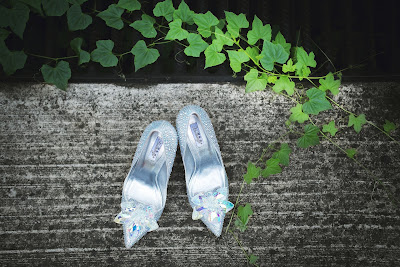 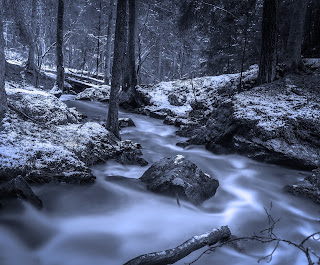 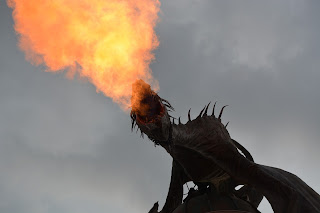 The only thing that could've made this book better is if it ended with the dissolution of the prince/princess match-up and quest system which seemed to put a lot of people in danger(even to the point of severe injury or death) and ran all over the lives of everyone in the quest's path without so much as an excuse me. 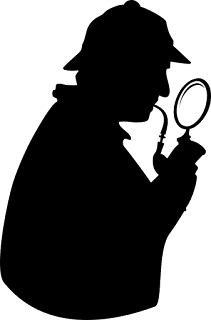 And that's how my February went! What was your favorite read of the month? Any good romances that went along with Valentine's Day?
Posted by Kristen Kooistra at 12:00 AM 4 comments:

This month I'm interviewing fantasy writer Krisna Starr who also happens to be a good friend of mine. Krisna sneaks her writing in around parenting her two adorable children and is currently working on her novel Dragons of Atlantea. 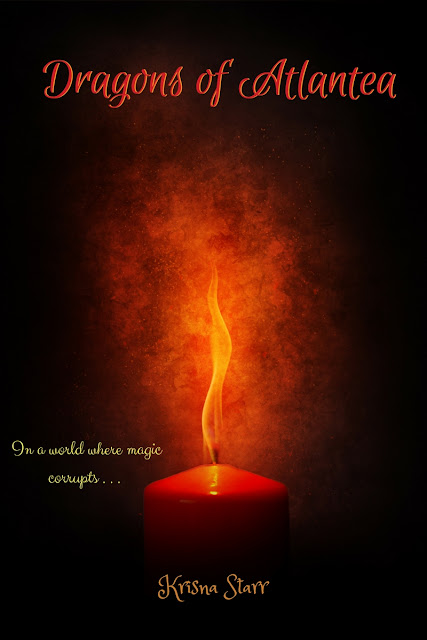 Kristen: What drew you to write in this genre?

Krisna: I’m an avid reader of almost all genres – mystery, thriller, sci-fi, YA, but my all-time favourite is fantasy. From the time I can remember, I’ve been fascinated by magic, different worlds and fantastic creatures like dragons, mermaids and unicorns. When I read novels featuring them, I get transported to their magical world and get to meet them :)

LOL! Who wouldn’t love to fly upon a dragon’s back, ride a unicorn or uncover the treasures of the ocean with mermaids?

Kristen: Fantasy is my favorite too! All the magical creatures and worlds, not to mention you have the freedom to create more and not be limited by our world.

When did you decide to become a writer?

Krisna: I don’t remember when it became a conscious decision. I’ve always been making stories in my head. After reading a fascinating book by Enid Blyton in my eighth grade, I started penning down my own story. But it was just for my entertainment. I had no wish to share it with any one. One story lead to another and before I knew it, the passion for writing overtook my life.
Kristen: What is your favorite motivational phrase? 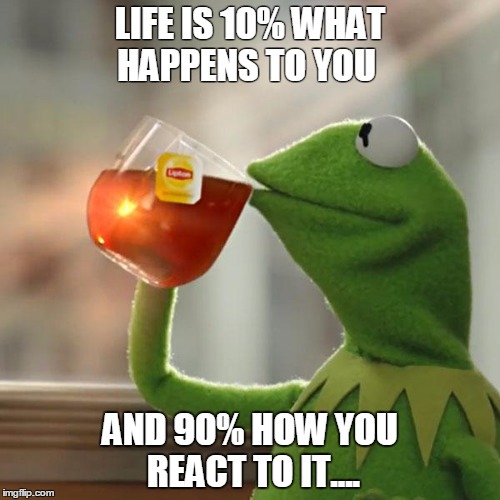 Kristen: Do you think that the cover plays an important part in the buying process?


Krisna: Definitely. I think an alluring book-cover is one of the major hooks for a reader. Many times, people think of a hook in terms of a great prologue or chapter 1. But it is much more than that as I described in my blog post on “Elements of a Strong Hook”.

Before a reader reads our chapter 1, his attention has to be grabbed in some way to entice him to pick the book, have a look at it.

When I go into book stores or browse through amazon, two things grab my attention – the book cover and a catchy title. If I’m hooked by them, then I read the back blurb and the excerpt.

So a great cover translates definitely to more sales.

Kristen: I'm of the same mind. With so many books available and so little time, the best place for me to start narrowing down choices is to see what covers catch my eye and go from there.

Where is your favorite place to write?

Krisna: Hm, my favourite place to write is the beach. I’ve always felt calm and peaceful when I sit on the sands of the beach and gaze upon the infinite ocean. And when I write in this state of mind, the words just flow like the waves. But, the beach is about an half-hour drive from my house and I can’t spend as much time as I want there.

So the next best place is the meditation center that is across the street from where I live. The atmosphere is so peaceful there that my mind is instantly calm. The ideas just flow. I’ve written some of the best scenes of my novel there. Of course life gets very busy that many times I can’t afford the time to even go across the street and spend some alone time. Then it’s back to my writing desk with my laptop :)

Kristen: I'd love to be able to write by the beach! Like you, I live about 30 minutes away from a decent beach(though mine's on a big lake, not the ocean!).

Thank you so much for joining me today and I can't wait to read your book once it's published! 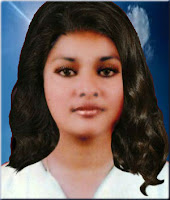 Krisna is an avid reader and a lover of dragons, unicorns and all things magical. She divides her time between living in this world doing her day-to-day tasks, and the wonderful world of her dreams that is full of magic and fantastic creatures. Her current WIP, Dragons of Atlantea
(working title), is set in the magical world of Atlantea where magic rules, dragons roar and angels soar in the skies.

Besides books, she enjoys spending time with her children, mediation/ yoga, music and watching animes on the net.